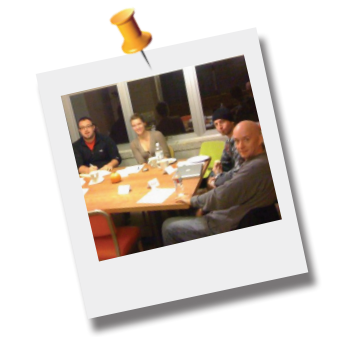 2 MILLENNIAL BOARD OF DIRECTORS

From the Millennials Online community, two select teams were chosen to provide a robust collaboration of viewpoints for three focus group think tanks where they would build the ideal Millennial-run business. Each session would have its own theme and build on the last, slowly developing their concept. In the first week both groups covered desired businesses ideas, collaborated on a venture and structured their product offering. The ideas teams came up with were all-encompassing (green, local, humanitarian, crowdsourced, politically-minded, personal, etc). However, it became evident early on that many of these features were not mandatory, but were nice-to-have considerations.

Week two covered messaging propositions. This is when the strength of engagement in non-traditional media and the lack of immersion in passive advertisements were discussed at length. All marketing campaigns the Millennials developed stemmed from community culture experiences and were deeply rooted in word-of-mouth techniques. Branding also notably played less of a role here, which foreshadowed later data that suggests a diminishing strategic need for branding amongst the Millennial population.

The final week explored company structure and organizational behavior. In aligning their business model to their core offering, Millennials chose a bottom-up advancement structure and merit-based acknowledgement plan over the traditional model. This choice originated from a lack of connection participants observed in the marketplace between the products themselves and many of the companies behind them.

Throughout these sessions, observations about interactions were also made. Amongst themselves and without stimulus to do so, the Millennials took on an egalitarian mantle – indicative of their community orientation and desire for peer-to-peer engagement. This fundamental basis would be seen resonating throughout the remainder of the research.

Millennial Inc is the core findings and implications of a six-month long global research study conducted 2010 that explored Millennials’ approach to business.